Olympic Games | Which USA Olympians had the most collegiate success?

Is there a correlation between success in college volleyball and future Olympic glory?

We took a look at collegiate national honors for all 12 members of USA’s Rio Olympics women’s volleyball roster. We tallied four categories: The Honda Sports Player of the Year (awarded to the nation’s best volleyball player across all collegiate divisions and organizations), the AVCA Player of the Year (for NCAA Division 1, where all the Olympians played), AVCA First-Team All-Americans and NCAA D1 National Championships. What did we find? 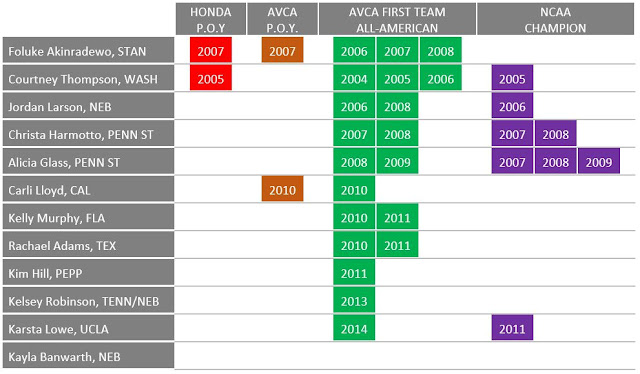 We’re happy to report that Court & Spark, the one-hour documentary Courtney Thompson, and featuring many of her teammates and coaches, is now available for rent or purchase on both iTunes and Amazon. All proceeds go to Puget Sound Region of USA Volleyball, a nonprofit umbrella for female and male youth, adult, indoor, sand and sitting volleyball. A great gift idea for players who have just completed summer volleyball camp!
starring