Just moments after his team had suffered a season-ending NCAA Semifinal defeat, Washington coach Jim McLaughlin was obligated to sit in front of a row of microphones and a room of reporters. After complementing Penn State, he chose to direct his next comments to the nearly 15,000 people who had filled Key Arena.

“Our fans were so good and have been so good and are always so good,” said McLaughlin. “I just hope that they come out and watch some good volleyball Saturday.  I hope they're here and supporting (Wisconsin vs. Penn State.) So many people have done a great job with this tournament.  And it would be neat.” 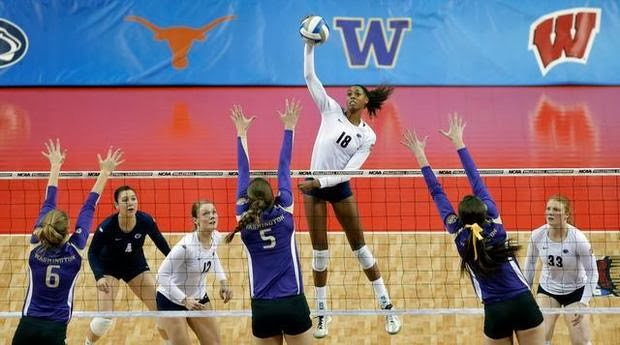 Tonight’s final between perennial powerhouse Penn State and free-spirited upstart Wisconsin looks on paper like a mismatch—Penn State swept the Badgers both times the teams met earlier this season. But who would have imagined that Wisconsin could have so thoroughly dismantled top-ranked defending National Champion Texas in Thursday’s first semifinal? There’s an old saying that it’s tough to beat a good team three times in one season, and Wisconsin has had plenty of time to try to figure out the Nittany Lions’ attack.

Most folks who bought Championship tickets purchased them as a package: two Thursday semifinals and Saturday’s finals. There are still some good seats available through Ticketmaster, and there will likely be seats at the Key Arena ticket windows.

Tonight’s contest will be the first NCAA Championship played in Seattle since 1995, when fans packed the Kingdome to watch UCLA defeat Arkansas for the men’s basketball title. Who knows when the next Finals in any sport will be back?

More than anything, it's a chance to see more elite-caliber volleyball in person. If this turns out to be a memorable match, you'll always be able to say, "I was there."

“I'll be there,” McLaughlin said at that press conference. “I don't know who I'm going to cheer for, but I’ll be there.”