Tonight, defending Pac-12 champion Washington is again ranked #2, and is again undefeated (22-0). This year’s Bruins are ranked #16 with a 15-6 record. The parallels are hard to miss.


This season’s UCLA @ Washington match was not televised. Sadly, the Pac-12 Network will not televise the rematch, either. You’ll have to try to stream the match on a feed provided by UCLA’s Sports Information Department.

Washington’s longest streaks to open the season during the Jim McLaughlin era: 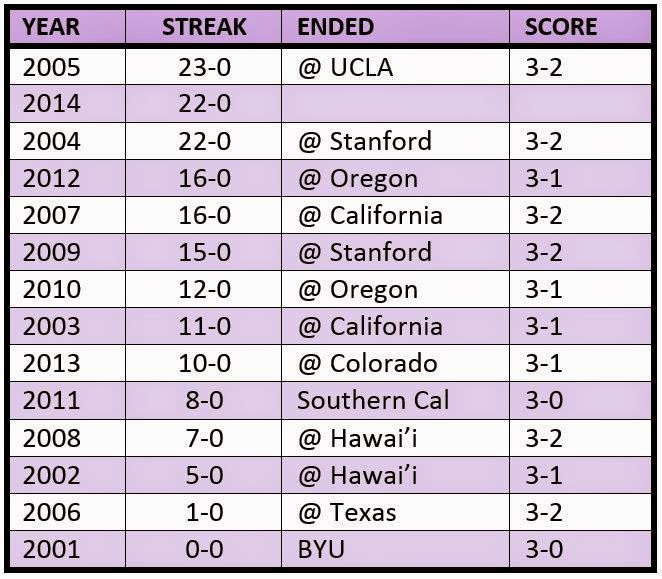 WE’RE BACK
Thanks to those who’ve asked about Volleyblog Seattle’s whereabouts the past two weeks. After covering Washington’s victory against Oregon in Eugene, we attended the 7th Annual Indie Spirit Film Festival in Colorado Springs, where our volleyball documentary, Court & Spark, won the Audience Award as the Best Sports Documentary. We then visited family in Colorado and California, enjoying autumn high-altitude camping in several National Parks along the way.

There were a few non-blog volleyball assignments, however. In case you missed them: