The keys to USA getting to the gold medal match

It should all come down to serve-and-pass.

When USA and Serbia square off tomorrow morning at 9:00AM (Pacific) in the Rio Olympics semifinals, they’ll continue a rivalry that stretches through most of the major international championships over the past four years. In that quad, USA holds a 4-2 advantage. 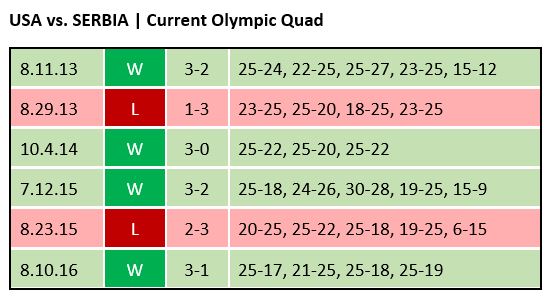 In 3 of the 6 matchups, it’s taken 5 sets. Only once was there a 3-0 sweep—in 2014, as USA won its first World Championship. When elite teams like these meet, it’s usually the little things that come up big.

PASS AND SERVE
Serbia still has several all-out jump servers. Although those rocket serves look impressive, USA rarely has difficulty passing them. By comparison, all USA servers use a variation of the jump float. The harder the serve and the less the ball spins, the more Serbian passers get handcuffed.

THROUGH THE MIDDLE
As the previous numbers demonstrate, Serbia is vulnerable to USA’s middle attack. That, in turn, is a product of USA’s passing, which gives setter Alicia Glass ample opportunity to set quicks to her high-flying middles. Serbia’s middles—Milena Rasic, Jovana Stevanovic and Stefana Veljkovic—get far fewer sets. Akinradewo leads all Rio Olympians with a .451 hitting percentage.

COVERING THE BLOCKS
Both teams are tall, and Serbia outblocked USA 11-8 last Wednesday. But USA hitters tooled the block 23 times, to only 12 times for the Serbians. And USA was terrific at covering Serbia’s block attempts, repeatedly making front-court digs to keep rallies alive.

COACHING STYLE
There may not be two more disparate coaches at these Olympics than USA’s Karch Kiraly and Serbia’s Zoran Terzic. Terzic is highly animated, continually berating his players for their mistakes. Kiraly is the picture of calm, offering nothing but words of encouragement. Wonder which style players prefer when the pressure is on?

OVERCONFIDENCE
Beware the easy first set win. Last night, Brazil seemed primed to roll after dismantling China in set one. Four years ago in London, USA was in the same position against Brazil. In both cases, the team that won big early ended up losing the match. Can’t say the Americans won’t be on notice.

OUR PREDICTION
Mihajlovic and Boskovic get their points, but USA’s balance prevails, largely because the Americans win the serve-and-pass battle. USA in four.