On August 31, 2001, Jim McLaughlin’s inaugural Washington volleyball team took the court for the very first time … and lost, 3 sets to none. The winner was BYU, a team that would finish the season ranked #22 with a 20-9 record.

The very next day, also at Hec Ed Pavilion, the Huskies defeated Purdue in the afternoon, but lost its second match of the season that night, falling to perennial power Texas 1-3.

The McLaughlin era started 1-2. But from that humble launch, his teams went on to win 102 of its next 105 nonconference contests. That, folks, is a success rate better than 97%, as sure a lock as in any team in any sport. 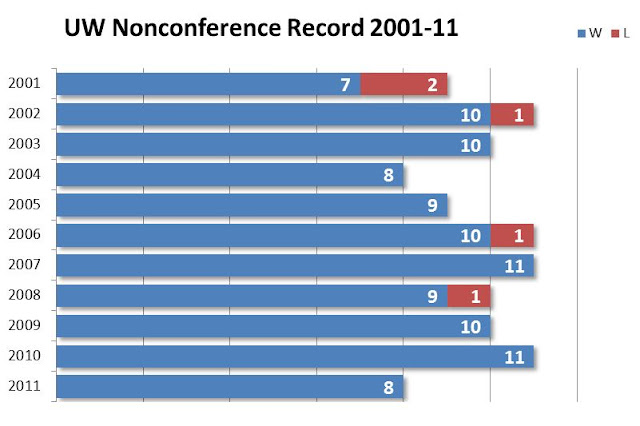 Since that first weekend in 2001, Washington has lost just three nonconference matches:

[Beating Washington in preseason has a price: you’re destined to lose to Stanford in the NCAA Tournament …]

Washington’s gaudy record is not a product of home-court advantage. Since 2001, the Huskies have played just 27 nonconference matches at home. 39 matches have been in the Central or Eastern time zones; 8 others in Honolulu.

Many of Washington’s nonconference matches are against regional D1 opponents like Portland, Portland State, Gonzaga and Boise State, none of whom have taken a single set from UW since Portland’s 1-3 loss in 2001. Many other opponents have been teams that—by season’s end—have failed to qualify for the NCAA Tournament.

Along the way, however, there have been some impressive victories:

You’ll notice that all those victories were on the road, often on the opponent’s home court. Top-level teams from other time zones are notoriously reluctant, however, to travel all the way to Seattle, unwilling to risk a loss against a high-powered opponent like Washington.

In professional sports, preseason contests border on meaningless. But in college sports, nonconference games can make all the difference once the playoffs roll around.

Starting last season, the NCAA Volleyball Tournament Selection Committee put greater weight on the difficulty of schedule when deciding which sixteen teams would host the first two rounds. That forced Washington, with a 22-7 record, to travel to Minnesota, with a 17-11 record. Minnesota, it seems, got bonus points for its preseason wins against Texas (twice) and Oregon, and for its close loss to USC.

This season, Washington tried to schedule tougher opponents, but again found resistance from teams unwilling to travel. It once again booked Long Beach State, and picked up a great August 31 match in Baton Rouge against powerhouse Purdue. But a road match against Penn State had to be cancelled when the Pac-12 rescheduled Washington’s conference opener with Washington State.

Of course, the whole RPI thing remains silly as can be, when teams like Washington play eight matches every season against the likes of Stanford, UCLA, USC and Cal. Compared to the march through the Pac-12, the preseason will always be a comparative cakewalk.